Home An Exploration of Deep Maps

An Exploration of Deep Maps

Over the past twelve months the terms deep maps and deep mapping have begun to appear with some regularity in scholarly literature, especially within the humanities. One reason is dissatisfaction with GIS as an appropriate tool for humanities disciplines such as history, literature, and cultural studies. For all of its power, GIS demands a measurable location, but much of the evidence used by humanists is notoriously imprecise. GIS treats time as an attribute of space, but time is a dynamic marker for humanists with references to past, present, and future often contained within the same piece of evidence, a circumstance the technology cannot handle gracefully, if at all. And GIS struggles to represent uncertainty, ambiguity, emotion, metaphor, or any number of other ways humanists use to discuss human events and behavior.

The deep map is intended to resolve these problems, while retaining the analytical power of GIS. Human activity, after all, occurs in space as well as across time, even if much of humanities scholarship privileges the latter. Spatial humanities seeks an explicit integration of space and time; it recognizes the reciprocal relationship between physical and conceptual space and human events. Winston Churchill captured this truth succinctly in another context when he said, “We first shape our buildings and then they shape us.” Deep maps are one way to accomplish this goal.

The notion of deep maps first appeared as a suggestion by the Situationists, a group of French theorists in the 1960s, who rejected categorical thinking and urged scholars to consider the full context (or situation) of the events they studied. Their idea of a deep map was similar to eighteenth-century gazetteers, that is, a pastiche of everything that could be discovered about a place—topography, climate, folklore, symbols, history, literature, and the like. It all gave a particular expression to space and it all must be examined together to understand how one place differed from another. A Native American writer, William Least Heat Moon, popularized this notion with PrairyErth (a Deep Map), a richly contextualized (if almost unreadable) portrait of Chase County, Kansas.

Until recently this examination could only occur in sequence—first this and then that—because the technology we used, writing, is linear. Yet, in fact, we all know that these influences most often work in concert with each other, so how can we capture this simultaneity? Mapping is one way, and GIS made it possible to integrate and visualize data from a variety of sources within the same geography. But too many layers of information produces a cluttered map, so how can you go beyond or through the map to see and experience the data you have about a place. Can you immerse yourself in the map in a way that gives you a richer perspective on the evidence you have uncovered?

Yes—if you create a deep map, which moves GIS and other spatial technologies into a virtual environment, such as a serious gaming engine, that allows us to access other ways to view space. The past decade has witnessed the rapid development of tools and methods that allow us to move more fluidly within both real and conceptual space. For instance, we can use easily accessible tools like Google Sketch-Up to recreate lost buildings, e.g., the Digital Roman Forum Project (Figure 1) or use image mark-up tools with GIS to blend the past and present (Figure 2). 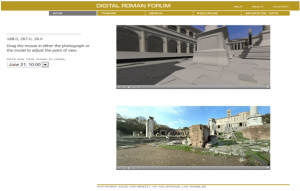 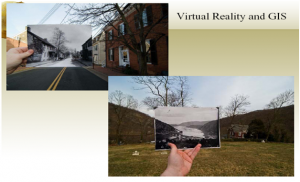 More ambitious is an effort to move GIS to an immersive environment, such as the C.A.V.E. (Computer Augmented Virtual Environment) or a gaming engine, thus allowing scholars to experience the spaces under study. For example, RomeLab (Figure 3) at the UCLA Experimental Technologies Center is combining Esri tools and Unity gaming software to understand how people might have experienced the Roman Forum, including how the spatial environment shaped important political rituals such as funeral orations. 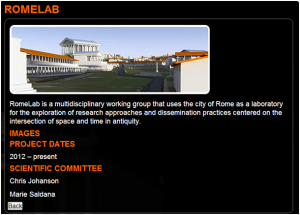 These deep maps offer a new approach to understanding the past—and the present. They invite us to experience history, literature, and culture, and to situate what we are studying within a spatial as well as a temporal frame. We will not need to approach the past only as a sequence of events but also as a simultaneous flow that mimics what we know about life from our own experience. The virtual environment offered by these deep maps also is open and open-ended, that is, we can invite other researchers into them and we can continue to expand their contents, allowing us to view our research subjects within the complex worlds they inhabited instead of the more limited ones we have constructed for them using our traditional tools of pen and notecards.

Deep maps have the potential to revolutionize what we do as scholars, as well as how we do it. For more on deep mapping, look for the forthcoming title, Deep Maps and Spatial Narratives (2014), from the Spatial Humanities Series at Indiana University Press and the Spring 2014 special issue of the International Journal of Humanities and Arts Computing.